A whistleblower alerted the government to failings around child protection in Haringey six months before Baby P died, according to this BBC report, which swiftly moves on after the opening paragraph to a government press release responding to the claims. Readers are left to guess the details.

It is understood a lawyer acting for a former social worker sent the letter to the then health secretary, Patricia Hewitt, says the BBC.

It might be understood, but it’s all a bit vague, principallly because the BBC seems to be entirely reliant on the government’s press office. Readers anywhere else, be it, the left-leaning Independent or right-wing Telegraph, not only understand; they know exactly what actually happened:

It [the letter] read: “Our client whistle-blew the fact that the sexual abuse had been ongoing for months and the new management brought in post-Climbie had not acted… We write to ask for a public inquiry into these matters.”, records the Independent.

And later in the BBC report we have this:

It is understood the social worker no longer works for Haringey council.

Again, it’s writing that really sounds like it’s coming from the ministerial department rather than a journalist.

At the Telegraph, on the other hand, they not only understand the social worker doesn’t work there, they know that Miss Kemal was later suspended and left her £34,000-a-year job with the council. An employment tribunal found that she had been singled out because she was a whistle-blower.

In fact, overall the BBC report does once again make me wonder: if it doesn’t actually tell you anything about what happened, does it still qualify as journalism?

Following the recent criticism of the BBC’s coverage of the US election, it’s worth mentioning this piece from yesterday’s Independent. It’s an interview with Peter Horrocks, head of news, and it’s classic Beebish. For anyone discomforted by the recent humility the Beeb’s been forced into over the Sach’s affair, Horrocks it the perfect tonic: he simply admits no criticism.

So, the cringe inducing interview with Gore Vidal: a highlight of the evening, says Horrocks. Political editor looking tipsy on screen? A very human moment. Dimleby past his prime? A very respected and experienced person, he says (somewhat dodging the question). Appalling graphics? Not at all.

So the Beeb’s perfect? Well, not quite: The BBC news executive admits that he was concerned by the lack of black faces in the BBC’s coverage on such a moment in history.

It’s been hard to avoid comment about the Beeb’s bias in the national press lately, but this article by novelist DJ Taylor on the Beeb’s US election coverage is worth flagging up:

While everybody in the room – party cheerleaders excepted – clearly wanted Obama to win, those in charge were doing a very good impression of studied neutrality. It was all a far cry from recent British general elections, where the anti-Conservative bias of certain BBC pundits… has been so flagrant as to make you wonder exactly how they got away with it… There is no great mystery, of course, behind this sudden excess of timidity. In the wake of the Brand/Ross disaster the corporation is simply terrified of offending anybody.

Worth mentioning, too, that Taylor’s a member of the Labour party, and this is from the left-leaning Independent.

And, sticking with leftist newspapers sticking it to the Beeb over the last couple of days, here’s Sue Carroll in the Mirror on Ed Stourton’s description of the Queen mother as a “ghastly old bigot”:

When the Queen Mother died, Ed Stourton condemned a tabloid newspaper for publishing details of her last moments, claiming the publication was “quite comfortable in the gutter”… Would his book about political correctness have made news without him shopping the nation’s favourite gran? In a word No.

Welcome to the gutter, Ed.

You wait months for a resignation, and then three come along at once… Another Beeb executive has quit over Ross and Brand’s phone calls. And the BBC is to apologise to the nation. Just for the call, mind. But it’s a start, so tune in today on Radio 2 at 10am, and again just after 9pm. Bloody repeats.

The IMF is not optimistic: it’s cut its 2009 growth forecast for the global economy to 2.2% from the previous estimate of 3%, as this report from the Beeb just about manages to mention at the end. And, more relevantly, in this piece yesterday about the rate cut. But can you guess what nugget of information readers of the Beeb’s reports miss out on?

Regular readers won’t be surprised, though, because unfortunately this is becoming a bit of a habit at the Beeb. 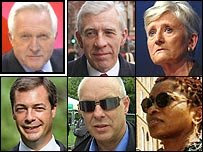 It’s that time of the week again. Fresh from victory in the US, Dimbleby and co. return to see if the power of positive thinking can sway the count following that even more important election, up in Fife. This week, someone accidentally invited UKIP’s Nigel Farage, so they’ve had to draft in two lefty commentators in the shape of Brian Eno and Bonnie Greer to ensure the requisite liberal majority. As ever, your views are important to us, so please leave your message in thread provided.