I was having a look at Katty Kay’s Twitter page, wondering if she had said anything about Sarah Palin lately. Not only is Palin on tour (as we know from Mark Mardell’s sneering the other day), but she said something yesterday about Paul Revere which raised a few eyebrows. It turns out Palin was actually correct and, as usual, a few Leftoid media dopes made fools of themselves laughing at her so-called ignorance.

Katty, the most hyper-partisan of all BBC employees working the US beat (yes, she’s worse than Mardell) now that Katie Connolly has done the honest thing and gone to work for a Democrat strategy group, didn’t say anything about Palin’s Revere remark, but still she did not disappoint anyone looking for her to reveal her personal political bias. Tweeting from her iPad, Katty sent her readers two links to hit pieces on Palin, both from the JournoList-infested Politico. 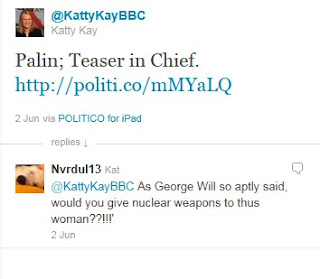 This Politico article is full of adjectives like “cartoon-ish”, “circus”, and “spectacle”. Oh, and the actual title is “Sarah Palin takes the media for a ride”. Katty editorialized that down to a sexist pejorative. Nice one, Katty. Notice also that the response from her reader makes it clear which side she’s on, as nobody would ask such a question if they thought Katty was either impartial or not far Left and a Palin hater. Katty does have form attacking Sarah Palin on air. The other tweet is equally amusing. 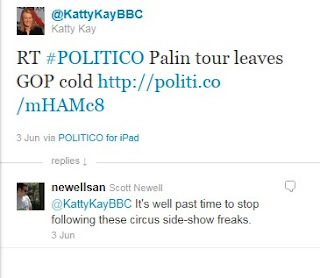 This Politico article is about how some in the GOP establishment aren’t pleased. Which is exactly what Palin’s supporters want, but of course Katty thinks it’s a bad sign for her. Partisan blindness. We can see where the Beeboids go to inform their opinions on US issues. The vicious atmosphere of Katty’s Twitter feed and her followers is again revealed in the reply. If Katty wasn’t openly partisan and anti-Palin, her reader wouldn’t feel free to make such a reply.

Further down on her Twitter page, Katty also retweets a Palin attack piece by none other than Andrew Sullivan (not going to give him a link – look him up if you want), notorious for his own version of a “birther” conspiracy (he still thinks Palin faked giving birth to Trig, while her daughter is the real mother). There is no greater hater of Sarah Palin than Sullivan, and Katty not only follows him but thinks his musings are important enough to share on her BBC-labeled Twitter account. This fact alone tells you all you need to know about Katty Kay.

If that’s not enough to get a scolding email from Helen Boaden, Katty also makes a tweet which combines her personal business interest – “Womenomics” – with her BBC profile. 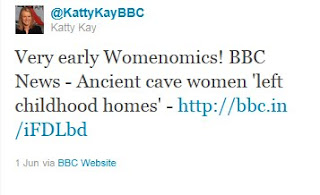 This is clearly a violation of BBC protocol. Yet Katty often uses her position at the BBC as a platform to advocate for her personal pet issues (see here and here), including the women in business angle. It’s also worth reminding everyone that Katty’s partner in Womenomics is Claire Shipman, whose husband is the current White House Press Secretary.

There’s another tweet on the page about an article discussing how women are oppressed in oil-rich Muslim countries. It’s not US news, just something she’s personally interested in, and uses her BBC credentials as a platform to promote it. She even ironically tweets about “women who take a stand” having their morals questioned. That’s pretty rich coming from someone who called Sarah Palin a tease for doing just that.

Another overtly partisan BBC employee in the US who is not fit for purpose.