Comrades – May Day – rise up – burn your TV Licence – cancel that DD – some might say . Its the last weekend before some elections for something . Time for the BBC to have more ‘revelations ‘ about something on behalf of its’ Socialist friends .

Meanwhile- in the real world ….

We are witnessing the BBC conducting an election campaign on behalf of the Labour Party. Some might say that such activity subverts the democratic process . But as we have seen in a recent election elsewhere – the BBC isn’t too worried about fairness – yet alone impartiality . Surely there is a score to be settled with the Far Left anti British Biased BBC …

The bias of the Far Left Anti British BBC takes many forms. For instance it can be non reporting of big protests or failure to give details of a suspect in a serious crime . Its like learning a language . You have to look for omissions to get anywhere closer to the truth – as opposed to the biased agenda driven propaganda of the BBC .

Please welcome a guest post by one of our readers for discussion.   Please keep on topic with your comments! 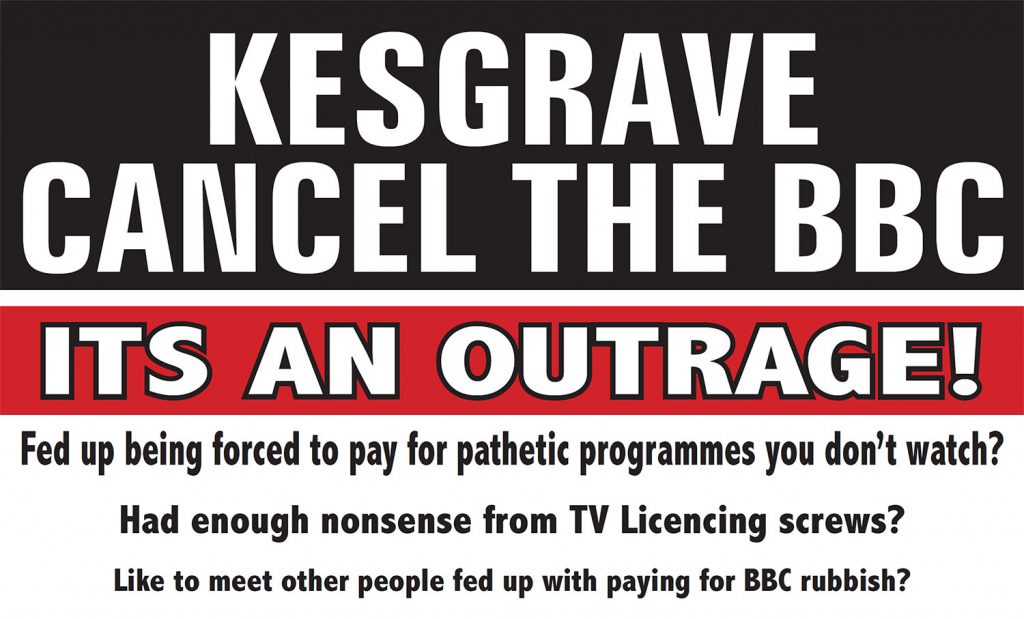 A means of hitting back?

What does the left have that we do not?  The left has community.  They have a strong presence in the community.  They own education, mother and toddler groups, scouts, guides, brownies and cubs, sports associations.  They run local groups like the Kesgrave Help service where you can phone up and they’ll help you get that heavy sofa downstairs if you live alone.  Not 5 minutes from where I live are dozens of Cancel Harpies keen to scream at me on social media.  I was thrown off Nextdoor, an international community web with sites in every locality over much of the world, including Kesgrave & Rushmere.  I had raised the issue of violent teaching in the Koran for public debate and they don’t allow public debate.  Nextdoor is owned by Facebook but run by local Cancel Harpies.

In my local community, like the local Tesco, for example, we interact with people who are full of taking the knee and bowing to Islam.  People who watch the BBC.  The store manager watches TV and pretends to be impartial.  But Tesco now has full time pop music intruding on your thoughts as you struggle to balance budget and bread.  Every 5 minutes there is a Standard English exhortation to PLEASE RESPECT OTHERS.  Didn’t a few university teachers resign recently in protest at the university’s widespread use of this word, RESPECT, as a Marxist injunction?  Like dissent is not respectful.  Well, now it’s at Tesco.  The left is a real presence in every community.  See if you can spot them when you go shopping.  They are the ones who are vociferous in your community, the ones who, in the words of Common Purpose, “lead beyond authority”.  Three or four middle class LHP Cancel Harpies who support each other have a massive influence out of all proportion to their actual numbers.  And there are a lot more than 3 or 4 LHP Cancel Harpies in Kesgrave.  What about YOUR local community?

It’s no accident that the BBC is an organ of Left Hand Path propaganda.  The Left Hand Path is a community based, middle class virus and its early proponents in both Russia and China were middle class.  Media professionals are of necessity educated and inevitably hold middle class values and ethics;  3 or 4 vociferous middle class LHP Cancel Harpies who were educationally Marxists will have begun to spread the word in their local middle class communities and among those influenced by their Marxist fartwaffle are the people who operate the BBC.  Something like that must be how the obscenity that the BBC has become started.  The terrible situation we are now in developed slowly over years and finally we have noticed.  We don’t have a vaccine and this foul virus in the heart and soul of Britain is eating us alive.  Is it too late?  What can we do to fight back?

The truth is, the Left Hand Path has massive presence and control at the roots of our society and the conservative right has nothing.  Forget “I-don’t-mind-woke” Johnson and his party of spineless moderates.  They are woke, they are not going to stop the BBC.  So what can we do?  The real question is: What can I do?

I want to free my community from the Left Hand Path which influences what happens where I live to such an extent I believe it’s true to say they more or less control it.  Therefore I must find a way to take it back from them.  I’m 70 and I don’t have experience of working with others in the community to create a fightback of some sort, but I know if nobody does anything we will continue to fade away.  I believe we are on the brink of the abyss.  It won’t be long before the arrest and mass detention of dissidents will increase to the point where the general public becomes aware of it and is frightened to speak of.  It has already started, but it’s in the early stage.  It’s no good whining on the web about all the terrible things being done in the name of correct thinking epitomised by the BBC and The Guardian.  They represent the community and have its support.  They don’t care about your whining.  For them a woke Tory government is just as helpful as a Labour government.  Red or Blue, Woke is woke, right?

So I started Kesgrave Cancel the BBC in the hope of bringing 3 or 4 other people together within the context of fighting back at something monstrous imposed by threat of criminal prosecution and sanction by our Left Hand Path influenced Tory government.  If 3 or 4 barking nut jobs can do it for LHP, 3 normal people can do it for the right, but contacting 3 such people is like struggling to awaken a dead parrot.  I’m making mistakes and learning as I go along.  Do please try to stay on topic in your comments;  I will read every comment and respond where relevant.  I am particularly interested in reading your ideas for what could be done to increase membership of Cancel the BBC in any community, how to leaflet (where can I get low cost leaflets and handouts printed?), how to organise leaflet handouts, shopping center stalls, public meetings.  Let me know if this description of Kesgrave is an echo of your own community or not.

Note: Defund the BBC is an online electronic entity which talks a lot online but has no community presence and it is, quite rightly, laughingly ignored by the media and the political establishment, as well as by the LHP which controls your community and mine.

Click here for a poster-sized copy of the banner image above, including a link to this article.

If you’re here you’ve probably figured this already. We had to change the site URL from biasedbbc.org to biasedbbc.tv.  This cock-up was due to a combination of errors – mainly due to the domain registrar being bought out and and transferring the domain to the parent company without telling us.  They also didn’t keep the correct domain settings, so the site became unreachable.  Due to them being overwhelmed by not-so-happy customers it’s proved rather difficult to get to our domain and fix it!  We thought it quicker just to change domain name as it was getting a bit frustrating.

So sorry about the downtime…

I’m going to send out an email to our user base to notify everyone.  If you would prefer we don’t have your user account any more feel free to use the contact form (biasedbbc.tv/contact) and we’ll remove your details.