Orla Guerin. Two words that one instantly associates with BBC bias at its very worst. Here Biased BBC’s Alan provides us with a little amble down memory lane with the oh-so-selective Orla,

‘Israel says its troops are here to crush the militants, to stop the suicide bombers. But Palestinians in Jenin say civilians are paying a high price. Before we could see too many more scenes like this the army hustled us away.’
Orla Guerin, BBC News, Jenin 2002.

UN says no massacre in Jenin
1 August
A United Nations investigation rejects claims that hundreds of Palestinian civilians were killed in Israel\’s attack on the Palestinian refugee camp in Jenin.

However all this did happen…..

Another suicide bomb rocks Jerusalem
19 June 2002
A suicide bomber kills seven people in Jerusalem, the second such attack in two days. The explosion occurred at a commuter bus stop on a busy road in the French Hill neighbourhood. US President George Bush put his new peace plan on hold as a result of the attack.

Nineteen dead in Jerusalem bomb blast
18 June 2002
Many commuters and school children died in a suicide bomb attack on a bus during morning rush hour in Jerusalem. The bomber was among the dead. The incident comes as US President George W Bush prepares to announce a strategy to relaunch the Middle East peace process.

Suicide bomber kills 16 Israelis
5 June 2002
The bomber pulled up alongside the bus at Megiddo junction, near the West Bank, during the rush hour, before detonating the explosives in his car. The bus was reduced to a scorched metal skeleton and 16 Israelis, mainly soldiers, were killed along with the bomber.

Bomb shatters Israeli calm
19 May 2002
A suicide bomber strikes in the Israeli coastal resort of Netanya on Sunday afternoon, killing four people, including himself. The Palestinian Authority has moved quickly to condemn the attack.

Suicide bomb disrupts Sharon visit
07 May 2002
At least 16 people are killed in a suicide bomb attack on a crowded social club on the southern outskirts of Tel Aviv. The blast went off as Ariel Sharon was beginning a meeting in Washington with President Bush. The Israeli Prime Minister returned early to Israel.

Israel struck by bus bomb
10 April 2002
Ten people are killed and more than a dozen injured in a suicide attack on a bus near the Israeli city of Haifa. Israel calls off any further military withdrawals from West Bank towns saying the anti-terror operations it is conducting there are not yet complete.

Israel hits back after suicide attack
10 March
Israel helicopters and gunboats have totally destroyed the headquarters of Palestinian leader Yasser Arafat in Gaza. The operation came early on Sunday morning, hours after a Palestinian suicide bomber killed 11 and injured more than 50 at a busy cafe in West Jerusalem.

Suicide bomber strikes Orthodox district
2 March
At least nine people are killed – including several children – in a suicide bomb attack in Jerusalem. Dozens of others were injured in the blast which happened on the edge of Me’a She’arim, an ultra-Orthodox Jewish district which borders on Arab East Jerusalem.

Female suicide bomber kills two
27 January
Police are working on the basis that the bomber was a Palestinian woman. If so, this would be the first time a woman has carried out such an attack. The bomb went off in one of Jerusalem’s busiest shopping streets.

Party attack kills seven
17 January
Israeli police say seven Israelis have been killed and at least twenty wounded in a Palestinian suicide attack in northern Israel. Eyewitnesses say the man entered a crowded wedding hall in the town of Hadera and tried to detonate explosives strapped to his body.

And of course this continued year after year along with thousands of rockets being launched at Israel….which is why in 2009 Israel launched its assault on hamas in gaza and built a security barrier to keep out the suicide bombers..

And yet the BBC presents Israel as the aggressor in its coverage.

The content of ‘journalist ” Guerin’s ‘scoop’ is of course pure and simply ‘crap’.

On Tuesday’s 6o’clock news on R4 there was a report about a religious school in Pakistanwhich had been brutalising its young pupils. Orla Guerin solemnlyintoned a list of atrocities that had been uncovered at this ‘religious’school, but neglected to go into more detail as to the particular religioninvolved. “What could it be?” I wondered. It wasn’t until very nearthe end that a mention of “Jihad” gave me the answer I was after.One has to question whether the BBC would have identified the brand of religionat the start of the item if, for example, it had been a Catholic school? 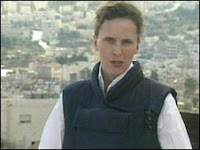 There is only one thing worse than BBC bias and that is seeing BBC bias rewarded. As a graduate of Queen’s University Belfast I am sickened (though not surprised at this most politically calculating institution) to see that it is awarding Orla Guerin a doctorate for services to broadcasting journalism.

Guerin is one of the most BIASED journalists working for the BBC – no small feat. Her love-in with the enemies of Israel has been well documented in these pages and elsewhere and yet she is now given academic endorsement for her bias. I hope she wears here keffiyeh when she calls to collect it!