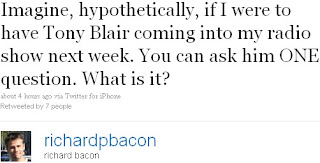 I bet Susanna Reid isn’t the only BBC journalist who reacted this way:

One cannot be without sympathy for the upset Alastair Campbell suffered in his interview with Andrew Marr today, both on a human level and as a staunch supporter of the Iraq war myself, but as a committed democrat one does feel the need to state that he and Tony Blair dragged British politics through the mud in coopting the already biased BBC as a propaganda weapon and are now victims of the monster they created.

As a youthful Tribunite member of the Labour Party in the late 70’s it was clear to me that the only real bias at the BBC was towards the Left, and I was against it as it was bad for democracy. When Tony Blair assumed leadership of the Labour Party, this bias went into overdrive. It was patently evident to anyone semi-politically literate that pre ’97 Tony Blair’s office was running an anti-Tory smear campaign in concert with the BBC to get elected, and once elected proceeded to govern with the same appalling contempt for democracy. Mr Campbell certainly wasn’t complaining when Mr Marr in both his Observer and BBC incarnations was doing New Labour’s dirty work traducing the integrity of the Conservative Party in the same manner that he has traduced his own and Mr Blair’s over Iraq.

What our former Prime Minister Mr Blair showed, to me at least, over the Iraq War, is that his heart was in the right place all along. He is, despite all his manifest shortcomings in attaining and retaining power, a personal hero. The Iraq War was just that critical. But if one’s ego is large enough to believe that the means he used via Mr Campbell to attain power were justified, sympathy for their vilification over Iraq has to be qualified. As it is, many of the moral bankrupts who he’d previously exploited to his advantage and who are now vilifying him would be calling for Mr Blair to be strung up for not going to war if we had to suffer the consequences of that today. Saddam could restart his WMD programme at any moment of his choosing. He had given Al Qa’eda leader Al Zarqawi refuge after fleeing Afghanistan. Had we stood down from the threat of war to enforce compliance of UN arms inspection, the marriage between WMD’s and terrorists that Blair feared would have become a reality, with all the apocalyptic consequences that carries.

We dont need another Iraq inquiry into Tony Blair’s decision making. What we need is an Iraq Inquiry into how the BBC acts as a propaganda weapon for the enemy at time of war.