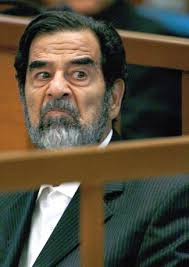 Let us be clear. The BBC opposed the liberation of Iraq long before US troops went in and ever since it has done everything possible to undermine and de-legitimise the war. Aligned with the “International Community”,  I am sure Saddam appreciated the efforts of the BBC to derail the necessary regime change and it’s just such a shame that he is no longer around, along with his evil sons Uday and Qusay, to listen to this kind of tripe on the BBC this morning. Richard Perle does his best but Humphyrs is bristling with the pompous self regard of the political left to whom every war is Viet Nam. At least he allows Perle to make his points without irritating interruptions Wonder what you make of the BBC coverage of the end of US operations in Iraq?

Whatever your own view of the Iraq War, the BBC constantly campaigned against it. The BBC also loves Obama. So how to report the withdrawal of US combat troops from Iraq?

Clare Spencer, the left-winger who writes most of the Daily View pieces for the BBC website’s See Also column, is back from her holiday today. Her first post is Daily View: US troops leaving Iraq.

After Fisk comes Steve Benen, a JournOLista at the Washington Monthly (Clare is fond of quoting JournOListas), who ‘balances’ Fisk by taking “some satisfaction” in this milestone being achieved. Bad war yes, but well done Obama!

After the left-wing Fisk and the left-wing Benen comes left-wing blogger Juan Cole of Informed Comment who synthesizes the two views to get the perfect BBC opinion:

What Obama has done is stay true to US commitment to get combat units out by September 1. That should reassure Iraqis – and Arabs and Muslims in general – about US intentions. It is a symbol of a turnaround in US policy, a repudiation of the Bush administration doctrine of preemptive war.

Fourth comes Roula Khalaf of the Financial Times who “argues…that the Iraqis have little to celebrate about the US withdrawal”. (This could be read as a criticism of Obama’s move, but isn’t.)

An article in Foreign Policy by John Negroponte, ex-ambassador to Iraq, is quoted next. His quote offers advice for the future, so it doesn’t really counteract the one-sided appraisal of the war of the article so far.

Clare then quotes the Daily Mail. That’s odd. But when you read the quote you find that the Mail article attacks Bush and Blair and calls the war “shameful, without any winners” – which is exactly what beeboids wants to hear!

The one bit (out of seven) that genuinely does provide balance comes from the Daily Mirror, where “the director of the Iraqi Association, a charity for Iraqi refugees in Britain Jabbar Hasan“ argues “that the Iraq war was worth it”.

However, it’s back to the far-Left anti-war campaigner Rose Gentle (who lost her son in the war and then joined Galloway’s Respect Party) to finish the article in the same Fiskian spirit as it began:

Life in Iraq hasn’t got any better. It’s got worse. Nothing has been achieved there which is very disappointing. There is still no stability despite thousands of innocent Iraqis being killed during the war.”

It was wrong; it was stated as fact by a BBC journalist; but because said journalist also reported someone else saying it was wrong it was not biased.

John Rentoul in the Independent summarises the BBC’s defence of lying for effect misquoting in their news coverage of testimony to the Chilcot enquiry.

One cannot be without sympathy for the upset Alastair Campbell suffered in his interview with Andrew Marr today, both on a human level and as a staunch supporter of the Iraq war myself, but as a committed democrat one does feel the need to state that he and Tony Blair dragged British politics through the mud in coopting the already biased BBC as a propaganda weapon and are now victims of the monster they created.

As a youthful Tribunite member of the Labour Party in the late 70’s it was clear to me that the only real bias at the BBC was towards the Left, and I was against it as it was bad for democracy. When Tony Blair assumed leadership of the Labour Party, this bias went into overdrive. It was patently evident to anyone semi-politically literate that pre ’97 Tony Blair’s office was running an anti-Tory smear campaign in concert with the BBC to get elected, and once elected proceeded to govern with the same appalling contempt for democracy. Mr Campbell certainly wasn’t complaining when Mr Marr in both his Observer and BBC incarnations was doing New Labour’s dirty work traducing the integrity of the Conservative Party in the same manner that he has traduced his own and Mr Blair’s over Iraq.

What our former Prime Minister Mr Blair showed, to me at least, over the Iraq War, is that his heart was in the right place all along. He is, despite all his manifest shortcomings in attaining and retaining power, a personal hero. The Iraq War was just that critical. But if one’s ego is large enough to believe that the means he used via Mr Campbell to attain power were justified, sympathy for their vilification over Iraq has to be qualified. As it is, many of the moral bankrupts who he’d previously exploited to his advantage and who are now vilifying him would be calling for Mr Blair to be strung up for not going to war if we had to suffer the consequences of that today. Saddam could restart his WMD programme at any moment of his choosing. He had given Al Qa’eda leader Al Zarqawi refuge after fleeing Afghanistan. Had we stood down from the threat of war to enforce compliance of UN arms inspection, the marriage between WMD’s and terrorists that Blair feared would have become a reality, with all the apocalyptic consequences that carries.

We dont need another Iraq inquiry into Tony Blair’s decision making. What we need is an Iraq Inquiry into how the BBC acts as a propaganda weapon for the enemy at time of war.

Full marks for BBC News today – three of the top online headlines fitted neatly into one of the key items on the Corporation’s agenda which appears to be to do everything possible to build up the Taliban as the genuine voice of the Afghan people and to undermine the NATO mission in Afghanistan (and also to remind us of previous problems in Iraq). Remember a few weeks ago when Paxman was haranguing the Afghan ambassador to Britain about electoral “corruption” and a proposed law allowing an Afghan husband to starve his wife to death if she refuses to have sex with him. Paxo forgot to mention that corruption was rife under the rule of the Taliban, that the wife starving law was designed as a political titbit to attract Taliban supporters and that the Taliban are explicitly opposed to elections or, indeed, any form of democratic political structure.

Keep tuned in for many further “failure”, “quagmire”, “probe” headlines unless, of course, the McChrystal/ Petraeus surge starts to work then Afghanistan will disappear from the BBC headlines just as it Iraq did during the Bush surge in 2007/2008 (derided and disdained by every talking head until it started to work…..)

Today marked the formal end of UK combat operations in Iraq. Now whether one was for or against the liberation of Iraq from the Saddamite tyranny (And I was totally in favour) I am sure we are all at least united in saluting the bravery of UK armed forces on the ground. Our fighting men and women always do us proud and sadly 179 lost their lives. What bothered me greatly about the BBC coverage of this today was the way in which Hugh Sykes kept referring to the 3000+ Iraqis who also died in the British controlled zone. He never explained how many of this number were Jihadists, or were killed by Jihadists. He simply lumped all the deaths together to obtain a handy soundbite figure that implied that the scale of UK deaths caused by the “invasion” were dwarfed by the huge losses to Iraqis. He ignored all context – the quagmire motif held to the end.

The recent success of the Iraq elections clearly runs contrary to the tiresome BBC narrative that everything our military has tried to achieve in that land has been a disaster. The “We’re all doomed, it’s a quagmire “ theme has been a constant feature of BBC coverage for years now so how to handle some good news? Well, earlier this morning they trotted on journalists Sudarsan Raghavan and Patrick Cockburn to review whether the results will lead to greater stability. Cockburn was quick to put the boot on, determined to suggest that despite all the evidence Iraq was still a disaster. Begrudgery incarnate.

There is an extraordinary omission from this BBC article on South Korean troops leaving Iraq. Plenty of figures are given, from the four years and three months spent there to the 18,000 troops who served in Iraq. One figure is missing though- only one Korean soldier died in Iraq according to icasualties, and he apparently has been forgotten. Don’t you think it would be appropriate to mention this loss, especially as it helps to contextualise the Iraq war for history?

I see that intrepid BBC journalist Andrew North has gone off to Baghdad to gather information to show us that jails their are dangerously overcrowded and living conditions are far from ideal for the residents. (Apparently there are no aromatherapy practitioners on call to relieve the stress of the in-mates.) North repeats allegations of torture and in general paints as bleak a picture of life in prison as possible and in this way, he continues the BBC essential narrative that things in Iraq just go from bad to worse. Perhaps the Howard League for the abolition of prisons could fly over and do a follow-up?

The BBC’s dislike of all things British is nowhere more evident than in its dislike of the British Army. Concepts such as patriotism and warrior bravery are perhaps a little too old fashioned in sophisticated metrosexual BBC circles. So a story like this is manna from heaven for Al Beeb and boy does it relish reporting the news that “the Ministry of Defence has agreed to pay almost £3m in damages to Iraqis who were tortured by UK troops in Basra in 2003, their solicitors say.” The use of the word “tortured” is under scrutiny since this is an allegation, not a proven fact. Indeed SIX of the seven soldiers who had this charge levelled against them were found INNOCENT and the a seventh soldier who was rightly punished admitted treating Iraqis inhumanely. Quite where the torture slur comes from I do not know, other than the BBC enthusiastically insert it into the first sentence. It’s not enough that our soldiers have to fight against Jihadi in Iraq, they also have to cope with the State Broadcaster taking every opportunity to stab them in the back.