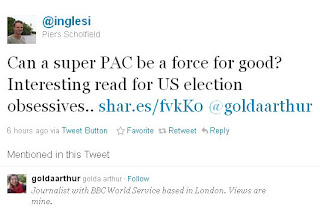 What’s “a force for good” in the eyes of a BBC World Service journalist? The link takes you to this article about a Vermont-based Super PAC called “Americans For a Better Tomorrow, Today”. Here’s what they stand for:

The group wants to highlight the issues and values brought into focus by the Occupy movement, including progressive tax policies, clean energy development, the protection of collective bargaining rights and a system that doesn’t routinely graduate college students with $100,000 of student loan debt.

Lefty values = force for good. The BBC’s coverage of this year’s presidential election is going to be a doozy, isn’t it?

Oh btw, remember Jude “I love him” Machin? She’s still got it bad: 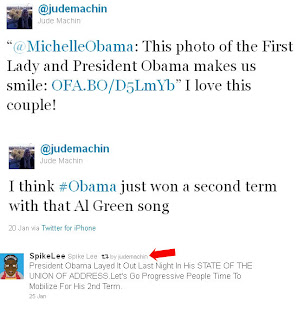 ‘Public sector workers will be “dramatically” better off in retirement and receive significantly higher wages than those in the private sector.’

Not so, suggests the BBC.
Fascinating example of BBC deliberately down playing good news for the public sector employees and choosing words very carefully to give the facts but in a way that almost reverses their true meaning.

Regarding the IFS’ latest report on pension reforms….

For the BBC the reforms reduce pensions and increase working life for all…..

‘The government’s latest public sector pension changes will make “little or no difference” to their long-term cost, an economic think-tank has said. However, it points out that the earlier decision to shift the inflation link for pension increases has substantially reduced costs and expectations.Unions point out that, overall, public workers must pay more and work longer. The report said that lower earners in the public sector were better protected that higher earners.’

Contrast that with the Telegraph’s report in which it reveals public sector workers will not only get higher pensions than now but also get over 8% higher pay than their equivalents in the private sector...and that it is only higher paid workers in the public sector who will see a reduction in pensions…..

‘Public sector workers will be “dramatically” better off in retirement and receive significantly higher wages than those in the private sector despite government attempts to scale back the generosity of their pay and pensions, ministers have been warned. The institute’s findings will call into question the widespread disruption caused by trade union protests over the treatment of public sector workers. “In general, lower earners in the public sector will actually get a more generous pension as a result of the recently announced reforms. That is, they will be able to retire at age 65 with a higher annual pension than they would receive under current arrangements. Conversely, higher earners are likely to lose out.” ‘

Of course this is the BBC in which a gloating Evan Davis tried to claim that RBS boss, Stephen Hester, refused his bonus because of Labour plans to have a Common’s vote on the subject…..where was his proof of that decision making?….more likely it was Hester’s wife who made him refuse it! Let’s also not forget that Hester (who is overpaid like all these people) received over £4 million in 2008 and £6 million in 2009…..wasn’t that when Labour was running things?…how soon they forget!

‘Mr Hester’s huge potential bonuses come on top of a total pay package of £35.54million since joining the bank in 2008. Brought in to turn the ailing bank around after a £45billion taxpayer bailout, Mr Hester was handed £4.99million in restricted shares, forgoing pay and bonuses. The next year, 2009, his pay package was worth £6.9million, and in 2010 that rose to £8.16million.’

“Sean Coughlan,BBC education correspondent, reporting here on the BBC web page today about a Twitter-linked session of the Education Select Committee: “… when Mr Gove was asked about a campaign against turning Downhills Primary School in north London into an academy, he accused the protesters of being linked to the Socialist Workers Party – and described them as the “enemies of promise”.

Mr Coughlan interposes his own opinion about this exchange. He writes: “But when #AskGove responded, it was in the old-fashioned language of right and left, haranguing the Haringey campaigners.”

On the BBC, Socialist Workers party argues; Mr Gove harangues; Gove acts like old-fashioned rightist when he argues back. SWP are just running a campaign.

Condemnation of Gove, but zero investigation by Mr Coughlan of the crux of this story, which any newsman should go after: is Mr Gove’s complaint that the discussion, and genuine parents’ views have been hi-jacked by the extreme left SWP, justifiable? “

Day in Day Out, some within the BBC produce a relentless drumbeat to accompany the narrative that the Coalition is wrong in everything that it does. Take these consecutive items ran on Today this morning. First up is the a report by the Institute for Fiscal Studies (IFS)  which claims that the government’s public sector pension reforms are unlikely to save money in the long term. It looks like we just have keep finding the unaffordable. Then comes the item that the government’s plans for NHS reforms have damaged and destabilised services. So, leave the dysfunctional NHS alone. This monotonous criticism of everything that the Government tries to do must be joy to Labour but hardly the mark of a balanced broadcaster.

Here’s a rather wonderful instance of anti GOP bias from our old pal, Jonny Dymond in which he characterises Obama’s opponents as the Party of  “old white America.” Gosh, that sounds almost a tad…racist. It seems that Jonny has concluded that the Democrats have the election won so perhaps Romney, Gingrich and co should just give up now and keep Obama in the White House? No agenda being pursued here, clearly. 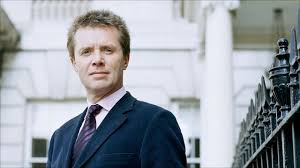 I got into a bit of a twitter debate with BBC Presenter Nicky Campbell yesterday. It started off with my tweet that I believed “same sex marriage is an oxymoron if you believe that Marriage is Biblically ordained”. Note the word IF. Anyway, Nicky seemed interested in this and started to pursue the subject of the Bible with me. I am an unapologetic believer in the Bible and Mr Campbell trotted out the usual inanities asked by the Atheist class. I was surprised by how many Atheists seem to follow Nicky and predictably they also wanted to join in the mocking of my Faith. It seems Christianity is all about Dinosaurs and God making the universe in the space it takes to prepare an edition of “The Big Questions”. Anyhow I moved the subject to ISLAM, and in particular the failure of his programme to tackle REAL issues like whether Islam and democracy are compatible. He responded that he has “done it, done it, done it” and so any suggestion that the Big Question does not tackle issues surrounding Islam is invalid. So, I thought I would open this issue up to B-BBC readers – what subjects would you like Nicky Campbell to cover on his programme and do you think that he treats all Faiths equally? Has he fairly dealt with the Islam issue? Please detail your views below – as I want to go back to him with some helpful suggestions. The stage is yours… 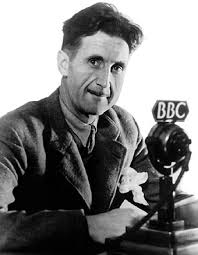 Monday morning and time for a new Open Thread! Detail your observations here…

‘The cost of flooding in the UK could rise to billions of pounds due to climate change by 2050….also there will be water shortages, drought and diseases.’ http://www.bbc.co.uk/iplayer/console/b019pq64 (17 mins in)

And who do we get to advise us?.Craig Bennett from Friends of the Earth!

‘Food security will suffer, insurance premiums go up, a very different country by 2050…a wake up call …serious implications for our livelihoods

‘The BBC bod is clearly alReady persuaded of the need to have a low carbon economy and implement much bolder action …..

‘Does the average person on the street know what the future holds?….How do you persuade politicians to deal with this?’

Of course just what ‘This’ is is still not clear despite the absolute scientific consensus that driving your car to Tescos is killing Africans in climate change caused droughts and wars just as surely as if they were sucking on your exhaust pipe itself.


“Another explanationfor why the ‘right-on’ Lefty liberals in the BBC hate Maggie Thatcher and are proIslam…and it has a nice symmetry…because it also gives them another reasonfor disliking Jewish people even more… Thatcher admired them:

‘Thatcher had no patience for anti-Semitism. “I simply did not understand it,”Thatcher wrote in her memoirs. Indeed, she found “some of [her] closestpolitical friends and associates among Jews.” “In the thirty-three years that Irepresented Finchley [a constituency in London], I never had a Jew come inpoverty and desperation to one of my town meetings… I often wished thatChristians would take closer note of the Jewish emphasis on self-help andacceptance of personal responsibility.” * Aghast that a golf club in her district consistently barred Jews frombecoming members, she publicly attacked her own party members for supportingthe policy. The Jews of Finchley were “her people,” Thatcher remarked –certainly much more so than the wealthy land barons that dominated her party. * In her desire to change and modernize Britain, Thatcher surrounded herselfwith bright Jewish advisors: Keith Joseph, Alfred Sherman, David Young, NigelLawson, Leon Brittan, Victor Rothschild, Malcolm Rifkind, David Wolfson, DavidHart, and others.’

A B-BBC reader draws our attention to this…

“A talk on sharia and human rights by NSS Council Member Anne Marie Waters’ atQueen Mary University of London was cancelled at the last moment because of anIslamist who made serious threats against everyone there.

… before it started, a man entered the lecture theatre, stood at thefront with a camera and filmed the audience. He then said that he knew whoeveryone was, where they lived and if he heard anything negative about theProphet, he would track them down.”

A search of BBC News site returned no hits for Anne Marie Waters. One canimagine what would have been reported had the aggressor been ‘Christian’ andthe victim Muslim?”