(This one is work safe)

Talking of which, here are the opening and closing words to James Naughtie’s report for the Today programme on Tuesday:

Naughtie: New York, Ground Zero around the corner. I’m standing on the site of a planned Islamic centre with a mosque, a proposal that’s turned into an angry national debate here and acted as a proxy for the wider culture war between President Obama and liberal opinion on the one hand, arguing that America stands for religious freedom, and the conservative Right on the other, saying that a mosque would be provocative, offensive and wrong.

Naughtie: Which leaves the writer Sam Lipsyte looking out to America from New York, wondering what on earth he can do, and dreaming.

Lipsyte: Sure, is there [sic] a lot of tittering and grousing and sort of blanket dismissal that there could be anything but hate in the Tea Party, and I gotta say that what, y’know, their presentation lends itself to that conclusion. And at my most despairing moments I too have that sense of why can’t New York just be its own country.

Judging by the latest poll for the New York Times, Lipsyte’s dream utopia could only be realised if they deported more than half the people (via Newsbusters):

Two-thirds of New York City residents want a planned Muslim community center and mosque to be relocated to a less controversial site farther away from ground zero in Lower Manhattan, including many who describe themselves as supporters of the project, according to a New York Times poll…

Over all, 50 percent of those surveyed oppose building the project two blocks north of the World Trade Center site, even though a majority believe that the developers have the right to do so. Thirty-five percent favor it.

Opposition is more intense in the boroughs outside Manhattan — for example, 54 percent in the Bronx — but it is even strong in Manhattan, considered a bastion of religious tolerance, where 41 percent are against it.

And yet BBC correspondents such as Naughtie, and Hilary Andersson, prefer to give the impression that such opposition is the sole preserve of a scary, reactionary right-wing Tea Party movement.

Kiera Feldman, the BBC’s new recruit from left-wing activist radio, isn’t the only recent addition to the Corporation’s staff in America.

Matt Danzico began his job as a US BBC interactive journalist in April. His current job description:

Write, shoot, edit, and produce text and multimedia stories for the BBC News website. Conduct research and interviews with individuals on topics ranging from media and culture to science and technology.

Here are some of Danzico’s tweets (click image to enlarge): 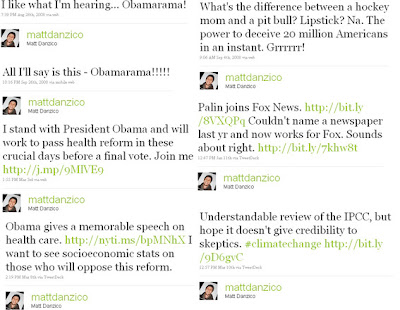 Another April starter was Daniel Nasaw, online journalist for the BBC’s Washington bureau. Prior to taking up his new role Nasaw spent a couple of years reporting about America for The Guardian, whose worldview he still touts:

Here he is writing about a Newsweek cover which showed Sarah Palin in cycling shorts last November:

Let’s focus our attention not on her legs but on her far-right political ideology, her baseless attacks on Obama, her attacks on women’s reproductive rights and her effort to purge moderates from the Republican party.

Hmm, no agenda there then.

My message to the news media: We are under enough fire as it is. Don’t let’s make our job even harder by giving Palin and her millions of supporters a legitimate grievance.

Let’s see where that measures:

Partisan reporting from the US? We ain’t seen nothing yet, apparently.

Update 19.45. In the comments Craig points out that another of the BBC’s April intake (so much for reining in spending) was former Newsweek political correspondent Katie Connolly (Twitter account here). Things may be bleak for journalists in America but at least left-wing hacks know that there’s always the chance of a job at the BBC where they can pursue their agendas protected from the horrors of the free market.

…for all those BBC hacks, with their selective memories, who are currently pushing the “Angry American Right” narrative:

Frei, Webb, Mardell, Mason et al – a bit of balance and a sense of perspective would be nice.

From The Washington Examiner:

Democrats have suffered from a string of scandals reminiscent of the corruption that plagued the GOP before the party lost the majority in Congress four years ago…
Charlie Rangel… is under investigation by the House ethics committee for five separate matters…
Eric Massa…stands accused of sexually harassing a male staffer…
New York Attorney General Andrew Cuomo is investigating whether (Governor David) Paterson improperly interfered in a domestic abuse case involving one of his aides.

Of those stories, only Paterson’s has been covered briefly by the BBC and – surprise surprise – the article fails to mention which party he belongs to. Google News searches on Rangel and Massa reveal a total lack of interest, even after fresh revelations about the latter’s bizarre predatory sexual behaviour.

It is completely inconceivable that the BBC would have dealt with these stories in the same manner if Republican politicians had been involved. The word “Republican” would be blazing from headlines and highlighted in the opening sentences of numerous articles. The “Republican sleaze” narrative would be unstoppable.

But these are Democrat scandals, and Democrat scandals simply don’t get BBC journalistic juices flowing. Move along now, nothing to see here. Come back when a Republican does something wrong.

For a particular word, in this Matt Frei piece on corruption in Illinois.

(Thanks Ed for pointing out the bad link)

I see that the BBC have managed to claim the political scalp of a senior republican in New Mexico. Fernando de Baca, the chairman of the Republican Party in Bernalillo County, New Mexico, also said Hispanics “won’t vote for a black president”. Mr de Baca had been approached by the BBC’s Jon Kelly for comments on the presidential election campaign at the New Mexico State Fair in Albuquerque, part of Bernalillo County. He was explaining why he thought John McCain would do well in the state, which has large population of Hispanics. “The truth is that Hispanics came here as conquerors. African-Americans came here as slaves.”Naturally this allowed the MSM thought police to hound de Baca from his position. One little victory for our non-partisan State Broadcaster.