Listening to the first ten minutes of The News Quiz last night (couldn’t take any more than that) I was struck by how the audience reaction seemed a little out of proportion to the “funny” comments of the panellists. Even allowing for the fact that I – a right wing bastard – am never likely to be particularly impressed by The News Quiz, something still didn’t ring true.

Here are some clips all taken from the first ten minutes of the programme. You’ll hear the final few words of some “amusing quips” by Andy Hamilton, Sue Perkins (x2), Sandi Toksvig, Miles Jupp and Jeremy Hardy, and the audience reaction to each. Each clip is followed by a shorter clip isolating part of the audience response. Finally, the 6 isolated clips are played one after the other for direct comparison. Is it just me or is there something a tad similar about them?

What do you think – is there a bit of laugh track manipulation going on there? Could it be that even the sort of people who attend News Quiz recordings aren’t as impressed by the jokes as we’re led to believe?

Update. In response to a request in the comments, here’s the relevant part of the 6 clips in the form of sound wave graph thingies. Obviously they’re not entirely identical because there’s other stuff going on in each individual clip, but I think they’re close enough to suggest the same bit of laughter may have been added to each one: 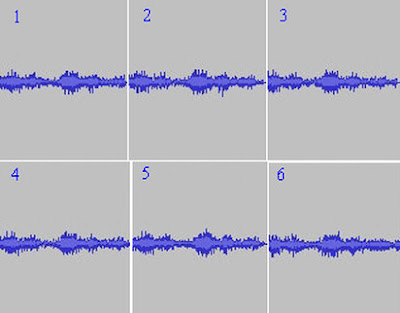 Also via the comments I’m reminded that during the opening ten minutes of this week’s show Sandi Toksvig said, “It’s the Tories who have been putting the ‘n’ into cuts”. I’ve become so jaded by Radio 4 comedy, so inured to the bias, that this passed me by as just another unfunny joke. On reflection it really is quite a thing to say, especially when one considers the time the show goes out.

(On the other hand the Tories will indeed put the ‘n’ into cuts if they back down and say “Not now”, as that idiot Huhne has suggested.)