Gavin Esler’s Dateline continues to regularly serve up panels where all four guests come from the Left. Today’s cast list was:

As a result, viewers got a one-sided set of views, some of which were very, very silly:

1. THE RESIGNATION OF DR FOX
Dr Magombe thought it boded ill for the government and complained about “the extreme antiques of the Conservatives”, especially the “outrageous things” they are saying about immigration. “The tone that the Conservatives always use in this debate really just shows normal people that they are extreme in their beliefs,” he said. YAB attacked Fox. Agnes said “I’m not going to cry over Dr Fox’s departure. It a good thing for Europe because he was one of the really staunch Europhobic ones in cabinet”. ‘Bari’ talked Tory “sleaze”, recalling the last Conservative government (but forgetting who was in power from 1997-2010, and all their sleaze.) That was pretty much it!

2. THE ‘ARAB SPRING’
As ever it was straight to ‘Bari’ for some ‘impartial words of wisdom’ on Syria. Atwan talked nonsense about Syria’s “neighbours” being about to arm the rebels, talked up “outsiders” and attacked the United States. YAB also attacked the “outside forces” for wanting to “keep the Middle East as it was” and named names, attacking specific neo-cons and “Zionists” in some semi-demented rant based around Dr Fox. (Someone, and it sounded like Gavin Esler, said “Yes” in response.) Dr Magombe then blamed American “manoeuvring” for putting the military into power in Egypt & later blamed the Americans for keeping Museveni in power in Uganda.

3. THE U.K. GOVERNMENT’S STRATEGY ON OBESITY
This began with YAB saying “they don’t care about obesity because rich people are generally thin and they care about the rich, not the poor. All they’re interested in is feeding profits to the food industry.” (A few hums of agreement heard from the other guests!) Agnes Poirier wanted to be “authoritarian” and ban McDonalds. Esler sucked up to Atwan about the Arabs having the best food in the world & Atwan got to plug his book on Arab food, and attacked our fry-ups. At least Dr Magombe disagreed with the rest on this issue.

What a ridiculous, biased programme Dateline is.

Here’s Richard Bacon introducing one of his guests this afternoon:

“Doug Stanhope is here. Just a remarkable stand-up comic. If you haven’t seen him and want a flavour of what he’s like go to YouTube now and type “Doug Stanhope Sarah Palin” [laughs] and get back to me.”

Bacon could have recommended any Stanhope routine, but it was the Palin one he wanted his listeners to hear. Here’s the meat of it:

Sarah Palin is the most fucking horrible, horrible [sic] – on so many levels…

Sarah Palin is this woman – she’s the mother of five, two of whom are retarded. One of them has Down’s Syndrome and the other volunteered for Iraq. She’s got a baby with Down’s Syndrome for Christ’s sake. How do you expect America to get behind her when even God hates her…

…after that last fucking retard baby came out of her – did you see the size of the head on that thing? The alien skull on that fucking retard baby had to tear her apart. Can you imagine the carnage, the violence of that thing coming out of her. It’s like someone stood at the foot of her cunt and yelled “Hey Kool Aid!” They [sic] bursting through her. That baby had to do more damage to her undercarriage than the Viet Cong did to McCain’s entire upper torso. I believe that if she were in the White House when she tried to deliver that child the secret service would’ve had to shoot it in the soft spot as it was crowning to save her… I think the Democratic Party is really dropping the ball if they don’t hammer the big cunt retard baby issues for the rest of this campaign and just stay on point. Don’t get distracted with all the other nonsense. Stay on point. Bring everything back to big cunt retard baby. They shoulda done that in the vice presidential debates and Biden dropped the ball. Everything shoulda come back to – whatever red herring she tries to throw at you – “Well I broke up the old boy network when I was the governor of Alaska” ” I heard the only thing you broke up was that sorry cunt of yours when you fucking threw that spastic out of your tard launcher, that’s what I heard.” And the moderator would’ve said “You have two minutes to rebut the big cunt retard baby allegations” and she’ll throw some other nonsense – “How’s your campaign equipped to deal with that proverbial 3am phone call?” And he goes “I don’t know but we’re not going to have some fucking waterhead running around kicking the phone of the hook so it goes straight to voicemail with his tongue on the button. I know that! What’s up with that?” And then the moderator would chastise the crowd to hold their applause to the end and remain seated. “What’s your record on earmarks?” “What’s your record on spitting out fucking bulb-headed [laughs] – I heard your fucking snatch is so split open they had to put a tent zipper on your snatch so your guts don’t shoot out when you sneeze. That’s what I heard.”

The routine ends with Stanhope saying: “Fuck you, go blog about it.” Thanks, I am doing.

This hateful shit is amusing to Bacon because it’s about Palin. The fact that he felt comfortable recommending it to his listeners speaks volumes about the groupthink that pervades the BBC/media luvvy world he inhabits.

If anybody thinks the BBC’s coverage of the 2012 presidential election will be impartial I’ve got something they might like to buy.

(I read somewhere that Richard Bacon’s wife is pregnant. I hope she has a safe pregnancy, an easy birth and a healthy child.)

Sorry, did I say “comedy genius”?

What I meant was “intellectually insecure BBC tosser fishing for anti-Palin sentiment from like-minded unfunny condescending arseholes on Twitter”: 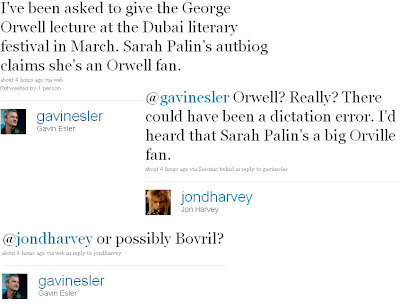 Orwell wrote a couple of classic books highlighting the dangers of overbearing government, he despised the snobbishness and anti-patriotism of the intellectual left, and he spoke out against the incessant lies of the press. Not much there to appeal to Sarah Palin, eh?

The fact that Esler even mentions Palin in his plug for the Dubai literary festival shows just how deeply embedded she is within the media luvvie psyche. Her very existence is screwing with their heads, God bless her.

More of Esler’s smug disdain for Palin can be heard on this week’s London Dateline (15 mins in, available on iPlayer for 5 more days). A senior BBC journalist laughing along to childish insults – it’s all part of the superior political discourse we in the UK get thanks to our impartiality rules.