The link takes you to this BBC video report of the Iraqi guy throwing his shoes at George Bush, complete with different camera angles and a slow motion replay.

A few minutes later there was a further tweet highlighting another one of Barlex’s favourite BBC online items: 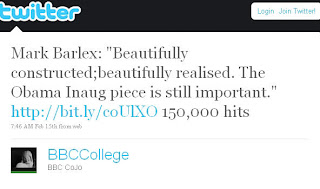 The BBC’s position on American politics summed up in two tweets.

On the subject of BBC echo-chamber Obama-loving Republican haters, there was a typically biased discussion about Sarah Palin hosted by self-important left-luvvie coke-snorting fame junkie ex-children’s TV presenter Richard Bacon on his Radio Five Live show yesterday. A perfectly nice American woman who – horror of horrors! – likes Sarah Palin had to endure Bacon’s continuous sneering and the negative comments of two journalists from anti-Republican publications (Newsweek and the Guardian). Another fine example of what passes for balance on the BBC.