Operation Save Gordon is in full throttle today and nowhere is this more evident than on the BBC. I refer you to the main news portal which leads with Postie Johnson declaring of Gordo that “… he is ” better than me or anyone else” as prime minister.” Well, certainly better for the Tories! However if you scan down the stories under Postie’s declaration of undying loyalty to Brown, look at the other BBC headlines. “Blears denies criticism of Brown”, “Clarke in smears row action call” and “Prescott rounds on Brown’s critics”. Notice the slant? Not just biased – outrageously biased. 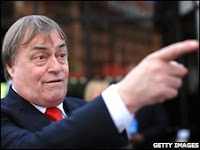 The BBC must be the only organisation on this planet that takes human wind bag John Prescott seriously. Prezza has waded into the Labour civil war – mindlessly trying to prop up Gordo. Isn’t it such a laugh to see hard Labour disintegrate in front of our very eyes whilst goons like Prezza rush into the busom of the welcoming Today programme in a vain attempt to save Gordon?

Wonder what planet  Nick Robinson lives on? Have you read his most recent blog post in which he relates how the news has just reached him that Gordo has lost the Commons vote over the Gurkhas. (The last time such a thing happened it was Sunny Jim in the death throes of his administration back in 1979) However Nick goes on to say “It is proof, if any were needed, that away from the economy the prime minister is consistently misjudging issues. “

Did I hear that right? Robinson is plainly implying that on the economy, the single biggest issue for most of the electorate, Brown is judging issues correctly! Is he mad?

Also even in this shameful defeat in the Commons, the BBC subtly tries to save their man by handing all the plaudits to Nick Clegg. So it was the even more left wing than Hard Labour Lib-Dem’s wot saved the day for the Gurkhas – were the Conservatives lost in action?

Great to see that PM Brown is going to unveil the government’s revised strategy for the war in Afghanistan, following his visit to the country. He is expected to say Pakistan – which was also on his tour – must be part of a solution to Afghanistan’s problems. Wow – now who would have figured that? Brown is simply acting as a cipher for Obama here and yet when Blair did the same for Bush, he was castigated for it by the BBC. However the BBC desire to keep HMS Brown afloat at all costs means a blind eye is turned to yet another UTTERLY worthless Brown “initiative”

Sorry I am a bit confused. The BBC currently seem to think that the worst GDP decline since records began is less newsworthy than a Government bureaucratic decision about prison building. You just can’t get the bad news to bury the bad news, these days.

The CBI must have a hot-line to Number 10. As we prepare to have the awful truth about shrinking GDP in our ailing economy unveiled today, the BBC have been able to slip in the news that the CBI are pretty sure that the worst is now behind us, so ameliorating the awfulness of the current economic position. Ask any small to medium-sized businessman if he agrees with that – because the BBC sure as hell won’t! No, they prefer to use the CBI as the alleged authentic voice of UK business and the CBI is singing from the same hymn book as Brown/Darling. It seems that each time bad economic news is announced we now have the CBI popping up to say that although it’s not good, it’s getting better all the time. Why can’t the BBC seek out broader business opinion on the state of our economy? Simple – it only ever asks the opinion of those who will provide the acceptable answer. The narrative is clear – green shoots are everywhere if ONLY you look hard enough. Pathetic.

…go back to your constituencies and prepare for victory! So goes the BBC narrative on behalf of the Labour government this morning, with useful fools like the CBI chipping in to try and help the hapless Darling. It’s amazing to listen to the Today programme shill that the UK has “almost certainly” left the worst of the..shall we call it a downturn to save blushes? – behind it. Even Nick Robinson popped up to declare that after an “awful” post G20 period, (Even though everyone agrees the G2O was a great success for the Gordfather, he swiftly added) it was back to business as usual today. But I disagree. EVERY day is business as usual as the State Broadcaster does all it can to big up the pro-Labour narrative – and between now and the end of this week the mission will be to implant the idea in the general population that green shoots are now everywhere and that Darling has thoroughly prepared the Nation for recovery. All delusional, of course, but also all part of why the BBC exists.

Looks like the BBC has decided that the big story tonight is the emergence of another video of police activities at the G20 event. It’s obvious to me that the only stand out story from that event was the death of Ian Tomlinson.

The BBC, it seems, has been looking for an excuse to demote ongoing revelations about systematic abuse of power within the Labour Government. The question of whether insiders like Nick Robinson, Robert Peston or others knew anything about the campaign is an interesting one…

You have to hand it to the BBC, they really are doing their best for Gordon Brown. Today they are providing much publicity to the claims by an economist called David Miles, soon to be a member of the totally independent MPC! More green shoots of recovery – recession bottoming out – nothing to see, move along, Vote Labour. You get the drift.

Anyone else caught this interview with Armando Iannucci on Today this morning? It allegedly concerned parallels between story lines in his TV programme “In the Thick of it” and the current McPoison Gate. I noted that Armando was able to get the sly line in that David Cameron also has spin doctors around him and so the culture of spin and spite evident in the current case was likely to continue under the Conservatives. BBC subtext; they are all the same, Save gordon.